Is Your Water Safe to Drink?

In 1989, Congress struck a blow to the Safe Drinking Water Act when it stipulated that public drinking water supplies must be made available "economically." This requirement meant that standards involving contaminants must consider not only the quantity of contamination but also the cost of removing contaminants.

In 1986, the U.S. Environmental Protection Agency estimated that some 40 million Americans were using drinking water containing potentially hazardous levels of lead. Acute lead poisoning can cause severe brain damage and even death. Effects of chronic, low level lead exposure are subtle, and infants and children are most vulnerable. Learning disabilities and hyperactivity have been associated with lead exposure, as have increased blood pressure, stroke, loss of hearing, chronic anemia, nerve damage and infertility.

Current government standards permit 50 ppb (parts per billion) of lead in drinking water. A stricter standard of 7.5 ppb has been recommended, but it is estimated that it would cost $5 billion to accomplish this. To reduce the lead in public water to 5 ppb would cost an estimated $21 billion.

Is it worth the cost?

There is no "safe" level of lead in drinking water. And keep in mind that the government's 50 ppb standard only applies to water as it enters your house, not how it comes out of your tap.

Most lead enters the water from home plumbing. Plumbing installed before 1930 most likely includes lead pipes. Even in homes built more recently; the solder used to connect copper pipes may contain lead.

Unfortunately, lead is merely one of the possible contaminants in your water. Testing by an independent laboratory may disclose that there are unacceptable levels of other toxins. Fortunately, there are various methods of home water treatment available for specific problems.

There are five principal groups of water contaminants: 1) particulate, which includes particles of rust, dirt and sediment; 2) dissolved inorganics, including heavy metals (mercury, lead, chromium, silver, etc.), and asbestos; 3) organics, which include calcium and magnesium carbonates, the components that make water "hard," and nitrates, chemical solvents, pesticide residues, and industrial pollutants; 4) radiological contaminants, both natural and industrial, such as radon and radium; and 5) biological pathogens, including bacteria, viruses and protozoa.

Problems associated with the particulate category involve mainly appearance, smell and taste. Particulates can be removed with simple filters. Filters are inexpensive and are made from fabric such as cotton, wool or fiberglass. Filters are effective only against larger particles. They are ineffective against dissolved toxic chemicals.

Dissolved inorganics are a very serious problem, especially lead, as previously discussed. However, another major inorganic pollutant is nitrate. Nitrate contamination occurs mainly in groundwater, especially in agricultural areas. Chemical fertilizers and manure from animals are particularly concentrated sources. The danger is particularly great for children. Nitrates are converted to nitrites in the digestive tract, and nitrites interfere with the ability of blood to carry oxygen, which can result in brain damage and death.

Dissolved organics include some serious problems. Many public water supplies contain low levels of organic compounds created as byproducts of water chlorination. Although these compounds are highly toxic, they are justified as acceptable because of the effect that chlorination has on microorganisms. Pesticides, industrial effluent, and hazardous waste sites are other sources of organic pollutants. These chemicals are associated with liver, kidney, and nervous system damage, and possibly cancer.

Dissolved organics include some harmless, although annoying, chemicals such as calcium and magnesium carbonates. These may leave deposits on sinks and tubs, and they may interfere with the effectiveness of soap. From a nutritional viewpoint, these minerals are present in extremely small amounts, and, even if fully absorbed, would contribute little nutritional benefit.

Radiological contaminants, such as uranium, radium and radon, occur naturally in various parts of the country. The most serious effects of radiation exposure include birth defects and cancer.

Biological pathogens, such as viruses, bacteria and protozoa, are uncommon in public water supplies due to chlorination. But some organisms are becoming resistant to chlorine, and this may become more of a problem in the future.

Remember, private water supplies are not subject to government testing, and it is up to the individual to periodically test for biological contamination.

To determine the level of purity of your water, there are several options.

If you have municipal water, ask the local utility for a copy of its latest water analysis. Federal law requires periodic testing and making the results available for inspection. These tests, however, reveal only the conditions of the water as it leaves the reservoir or treatment plant. They do not reveal if lead is leaching into your water from your plumbing. You can have lead levels checked by a private testing laboratory.

If your water is from a well, you can call the local public health department to inquire about groundwater problems in your area. In general, if your water is from a private well, you should also test for organic chemicals. In agricultural areas, nitrates and pesticides should be among the requested tests. If your house is more than 30 years old or contains copper pipe, you should test for lead.

Tests can cost from $30 to $200 depending on how many tests you request. Consumer Reports found the tests to be generally reliable but recommended a test by a second lab to verify any suspicious results.

You can do quite a bit to improve your water purity. The three primary home water treatment methods are: 1) activated carbon filters, 2) reverse osmosis systems, and 3) water distillers.

Activated carbon filters work by a process known as adsorption whereby the carbon attracts and holds various pollutants in a honeycomb of tiny channels and pores. They are best suited for removing bad tastes, odors, chlorine, organic chemicals, and pesticides. They are not effective against microorganisms, lead or heavy metals, sodium, fluoride, or minerals that produce hardness.

Drawbacks-Carbon filters can become breeding grounds for microorganisms. Sediment in water can clog the filter. Effectiveness declines over the period of use-it is necessary to be diligent about replacing cartridges.

Reverse osmosis uses semipermeable membranes, which keep out many pollutants. Water pressure, minimum of 40 psi (lbs. per square inch) forces the water against the membrane.

Drawbacks-Reverse osmosis systems waste a lot of water. Only 10-25% of the water passing through the unit is forced through the membrane. The rest goes down the drain. Reverse osmosis is slow, 3-6 gallons per hour. There are two types of membranes. The faster, more efficient of the two degrades in the presence of chlorine. Reverse osmosis systems should be used in conjunction with prefilters for sediment and post-carbon filters to remove dissolved organic chemicals, such as pesticide residues, etc. Efficiency drops with low water temperature. These systems can be expensive to install and maintain.

Advantages-Reverse osmosis systems do not use electricity, and the cost per gallon of treated water is less than distillation.

Water distillers work by boiling water and then condensing the steam into purified water. Distillation is most effective at removing sediment, dissolved inorganics (including heavy metals), radiological contaminants, and biological pathogens. It is less effective against some volatile organic compounds unless combined with a carbon filter.

Drawbacks-Water distillation is slow and uses considerable electricity, making it the most expensive method of water treatment. Distillers require regular cleaning, are noisy, and may vent off volatile chemicals. They also give off considerable heat and are expensive to purchase.

Advantages-Distillation, especially when combined with a carbon filter, is the most effective means of home water treatment.

Which system of home water treatment to choose depends on the type of contamination to be removed as well as financial considerations.

The accompanying chart summarizes which systems are effective against various contaminants. Activated carbon filters can be used in combination with reverse osmosis or distillation for complex problems.

Another alternative is to purchase treated water from bottled water companies. We recommend water purified by steam distillation because "purified" water or spring water may not be better than what comes out of the tap. 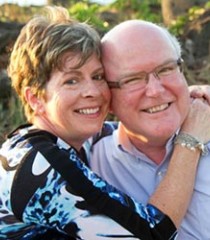 Mark Readinger shares his story of being diagnosed with ulcerative colitis nearly 30 years ago, and how he turned it around, as well as inflammatory arthritis, after fasting at TrueNorth Health Center.
Read More